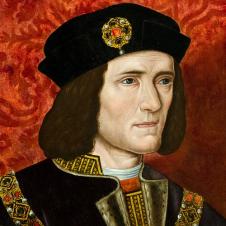 Image of a portrait of King Richard III

In November 2014 the Parish Council formed a Steering Group to prepare for the cortege procession carrying the mortal remains of Richard III to Leicester Cathedral via local villages including Market Bosworth.

The proceeds from the sale of the roses were generously donated to the Parish Council to create a Richard III legacy fund. Working with the traders and the Steering Group, the Parish Council commissioned a permanent arts installation by local artist Damian Witty to mark the events of 22 March 2015 when the cortege procession stopped in Market Bosworth for a ceremony in the Market Place. 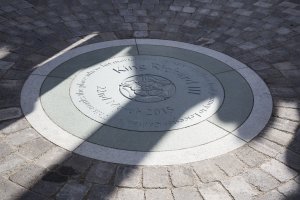 Photograph of the finished commemorative artwork, set in to the ground in front of the War Memorial in the Market Place.

If you are interested in Richard III - and his adversary Henry VII - why not also take a look at Bosworth Battlefield Heritage Centre's website, the King Richard III Visitor Centre website, and the Leicester Cathedral website for more information. The Richard III Society, which aims to promote research into the life and times of Richard III also has its own website.